All Nick wanted was one secret; one harmless guilty pleasure that the other guys didn’t know about. Of course, nothing is ever simple when it comes to secrets and when a series of mysterious accidents begin to occur while the boys are on tour Nick soon realizes that his one and only well-kept secret may hold the key to his friends’ recent misfortune. With everyone’s lives on the line, will Nick reveal his embarrassing secret and endure the ridicule, or will he try to be the hero and resolve the situation on his own?
Categories: Fanfiction > Backstreet Boys
Characters: Group
Genres: Drama, Suspense
Warnings: Death, Sexual Content, Violence
Series: None
Chapters: 33 Table of Contents
Completed: Yes
Word count: 65586
Read Count: 34632

"Love isn't a decision, it's a feeling. If we could decide who to love, then life would be much simpler,
but much less magical."
Categories: Fanfiction > Backstreet Boys
Characters: Group, Nick
Genres: Dramedy, Romance
Warnings: Death, Sexual Content
Series: None
Chapters: 30 Table of Contents
Completed: No
Word count: 33253
Read Count: 33723

He watched the newcomer from a distance, and hated him instantly. He didn’t just dislike him, no, he hated him with his whole being.  Who'd ever thought the one you once hated, would be the one thing you would be missing dearly some day?

a story about friendship, betrayal, forgiveness and saying goodbye. About Kamille tea, an interesting fear of elevators and what actually means to be a brother.

[Report This]
Published: 10/26/13 » Updated: 10/30/13
In A World Like This by DelphinaCarter Rated: R [ - ]
Summary: *Abandoned* This story has been rewritten. If you want to read the reboot, it's called Nowhere To Go :) hope you check it out!! In a world like this where some back down I know we're gonna make it.
In a time like this when love comes round I know we gotta take it.
In a world like this where people fall apartâ¦In a time like this when nothing comes from the heartâ¦In a world like this, I've got you.
Categories: Fanfiction > Backstreet Boys
Characters: Group
Genres: Action, Adventure, Drama, Suspense
Warnings: Death, Violence
Series: None
Chapters: 19 Table of Contents
Completed: Yes
Word count: 15436
Read Count: 18065

Wedding bells are practically ringing and Nick's best man is... well, man's best friend. Nacho's got his tuxedo fitted and he's ready for his close-up on the VH1 wedding special Nick and Lauren are filming. But then one week before the wedding, disaster strikes. Can Nacho get in touch with his doggie-side or is Nick's wedding's gonna be ruined by a crazy producer with the hots for Lauren...? Find out in Nacho's Big Adventure.


[Report This]
Published: 09/12/13 » Updated: 09/24/13
The Secrets That We Keep by Mare Rated: PG [ - ]
Summary: Once upon a Time Kevin didn't want anything to do with a 15 year old he was stuck having to work with everyday. Then things happened which forced him to get to know that kid a little bit better. Sometimes we all need to grow up and realize that things aren't always like they seem. A coming of age story for the oldest member of the group.


[Report This]
Published: 05/18/14 » Updated: 09/16/14
When We Collide by freedomwriter Rated: G [ - ]
Summary: A bumpy busride on a stormy cold night is often not a good idea. After a fateful, explosive collision, four Backstreet Boys are left stranded, struggling to get back to civilization and wondering where their fifth member has gone.
Categories: Fanfiction > Backstreet Boys
Characters: Group
Genres: Action, Adventure, Angst, Drama
Warnings: Violence
Series: None
Chapters: 35 Table of Contents
Completed: Yes
Word count: 54776
Read Count: 31849 âWe had it all, this love so strong. Now everything we had is gone. If you could read my mind, youâd know Iâve crossed that lineâ¦â 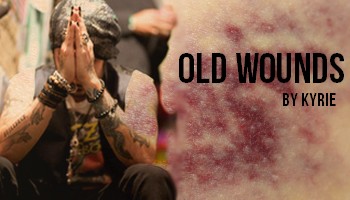