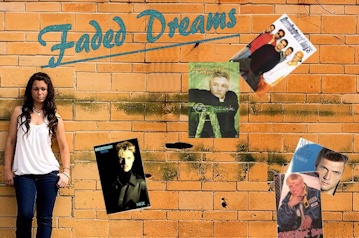 You see me. You say you wish you were me. Funny thing is... most days I wish I were you.

Hi, I'm Annie and knowing Nick Carter personally isn't all it's cracked up to be.

The next day I had gotten on the computer first thing and added the screen name he had given me to my friends list. Three days passed as I did my best to watch for him to get on-line. When I finally saw him come on I squealed a little and clicked on his name. I began to type 'Hi' but stopped myself from hitting send. I fear his reaction. I worried if messaging him right away would make me look desperate. I also debated on weather I should let him message me first. I wondered if he even remembered me. I thought, what if it's not even him. After what I'm sure was at least thirty minuets of silently arguing with myself I finally hit send. A lump instantly grew in my throat making it feel hard to breath. He did not reply back right away. In fact there was a moment when I thought he wasn't going to. Just when I was about to close out of the program heart broken, he replied. "Hey, Annie right?" "Yeah, what's up?" I responded. "Catchin some free time." I wasn't sure what that meant but I decided to just go with it. "You get much free time?" "Not when I'm on tour." He im'ed back then added, "Sound checks, meet and greets, schooling, concerts, appearances, rehearsals." "Wow, yeah. I thought School, homework, babysitting and piano lessens was bad." I stopped to smile. I couldn't believe this was actually happening. I thought I was so special. Nothing could have stomped out my joy in that moment. "You play piano?" "Lol, not very well." I quickly typed back. It was true. I was only doing it because my mom wanted me to. I had been asking her to let me quit. "Music is music. Don't matter if it sounds good or bad. It's still music." He told me. "I know, I just don't like playing music. I'd rather listen to it and sing along." "Lol." I swear I could hear him laughing. His laugh was breath taking. All the while we went on I had one question looming in the back of my head. I wanted to know why he had given me his personal messenger name and if I was the only one he had done it to. I felt strange asking him but wanted to so badly. "Be honest, does it get old after awhile? Hearing the girls scream your name and freak out when they meet you?" "Some days it does. Every now and then I just want to be treated like a normal person." "Yeah." I replied. "I mean, I know I'm not normal but still, sometimes it would be nice to meet a girl without her squealing like a six year old." I stopped for a moment. Had I squealed? I couldn't remember squealing. "Did I squeal?" I finally just asked. "No, you were totally different. You was all calm and acting like meeting me was no big deal. Honestly, it was an awesome change." "Is that why you gave me your personal aim name?" There, I asked. My heart began to pick up and beat harder. My hands twitched slightly. I was beyond nervous of his response although I still don't know why. "Yeah, I mean... I hope that's ok." Again I smiled, "My aim name is 'carter girl' and you wanna know if it's ok that you gave me your name?" "Ha, yeah, right. You just don't act like a fan. I mean, I've never given my aim name to a fan before but I image they wouldn't be as chill with me as you are being." "Thanks... I guess?" I wasn't sure if that was a compliment or not. "Hey, listen I gotta go but I'd love to talk to you again." I nodded like a dork as if he could see me then typed, "It'd be awesome to talk to you again too." "Alright then, next time I'm on I'll message you." "Kay, bye Nick." I smiled ear to ear. "Bye Annie." As I watched his name go offline on my friends list I slumped back in the chair and smiled a big goofey grin. I had just chatted on-line with my biggest crush, a celebrity and he wanted to talk to me again. I never could have imaged that just playing it cool at the meet and greet would lead to this. I was so proud of myself for being observant and deciding to treat them all normal. I had this feeling deep in the pit of my stomach. Something told me that this was only the beginning.

Sorry about this chapter not having as much detail and desriptivness as the last two. It was hard trying to add "color" and "flavor" to a simple on-line chat. Either way, thank you again for reading and I hope you stick with this story cause I promise it's only gonna get better from here.