A Morning Moment by ambitious_alaina
Summary: 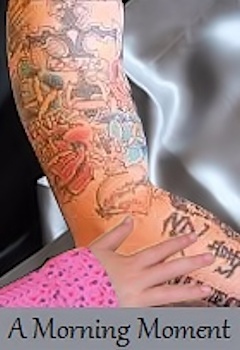 AJ has a moment with his daughter early one morning.

Early one morning I laid in bed resting. It wasn't often I got the chance to just lounge in bed.

As I heard the door to my bedroom open slightly I laid perfectly still.

I heard a small voice attempt to whisper.

I heard my door open more then shut followed by small feet moving toward me.

I didn't move in hopes she would go away so I could rest longer.

I didn't hear anything for a moment. Instead, next I felt her crawling onto my bed.

"Daddy?" Once more she whispered.

"Daddy is sleeping." I simply replied with a groggy voice.

It threw me off. She had never responded that way before.

Then suddenly, while my eyes were still closed I felt her pulling back my bed sheets. Normally I would have had to stop her but last night I was smart enough to sleep in sweat pants.

Next I felt her lay down next to me. I couldn't help but let a smile cross my face even though I was confused. My little girl was usually full of energy. She never wanted to lay in bed with me.

It seemed like the older she got the more distant she became and the less she wanted me cuddling her. She would much rather me chase her around and tickle her or play tea party with her.

As she cuddled in close to me I knew their was no way I was gonna push her away so I could sleep. I was going to enjoy this moment no matter how short because I knew far too soon it would be over.

I lifted my arm and placed it around her tiny four year old frame. This action cause her to move her head full of black curls onto my bare chest.

I moved my head so I could smell her. I know it sounds strange but ever since she was born I enjoyed just taking in her smell... uh... sometimes.

Ya know, I've smelled her so many times I bet a million bucks that I could pick her out of a crowd full of a hundred four year-old's just by smell alone.

She laid perfectly still for the longest time. It warmed my heart and almost brought tears to my eyes because I never wanted the moment to end.

Just as I thought maybe she had fallen asleep I felt her hand move over my other arm. I knew without looking exactly what she was doing. She did it often. What she did next though she had never done before.

"Daddy, what are all these pictures on your body?"

"Their called tattoos." I told her.

"Does mommy like your tattoos?" She asked me as she still traced them.

"I guess..." I trailed off. "Yeah, sure." I had no idea how to respond safely. Ro loved my tats. She often told me how they really "excited" her. Of course I couldn't tell my little baby girl that.

"If she likes them then how come when I draw pictures on my hands she makes me wash 'em off?" Her voice was so sincere.

I chuckled a bit, "Cause daddy's are permanent tattoo's. Yours are washable marker."

"Maybe I should get a per-na-mint tattoo." She told me.

With my eyes still closed I laughed out loud.

"Baby, getting tattoo's hurt; plus you gotta be much much much older."

For a while she stayed silent. I thought maybe the pain thing had put her questions to an end. Of course a few long moment's later she began tracing them again. Her action was quickly followed by another question.

"What does this one mean?"

I peaked my eye open to see what she was touching.

Again I had to look, "It's a comedy mask." I quickly added, "Comedy means funny." I knew she wouldn't know.

She rotated my arm, "This one?"

"It says AJIGGITY; it's a nick name." I knew that one without looking.

Next her hand moved up and touched my neck, "It's a skull with a rose." I told her.

"Your skull is the bone in your head right?" She questioned.

"Yeah, that tattoo is kinda for another nick name."

Once more she seemed to still. I took a deep breath. I think I had always known the day would come when she would ask about my tattoos. I was prepared to explain them. Well, all but one.

My heart jumped into my throat when I felt a single tiny finger trace around my belly button.

"What is this one mean?"

I squeezed my eyes close. How in the hell could I explain THAT to my four year old.

"It's uh, daddies favorite number. I told her what I told the fans back when they were all mostly still underage.

"What number is it?" She wanted to know.

She paused the spoke, "Mine is four cause I am four. Do you like it cause your sixty nine?"

"Not hardly! Daddy is old but he aint that old."

"Why is sixty nine your favorite then?" She asked directly and for a split second my heart stopped.

"Oh, baby, you know what? Daddy is really hungry. Could you do me a huge favor and go tell mommy I need her to make me breakfast?"

"Sure." She said sitting up quickly and getting off the bed.

I looked at her as she ran toward the door.

Suddenly, with her hand on the nob still she turned slightly toward me, "Daddy?"

I smiled big as I rolled and looked at her, "I love you too baby. I love you more then you will ever know."

She grinned and with that, she was gone.