History by DelphinaCarter
Summary: The year is 2011, and Kevin has been away from the Backstreet Boys since 2005. When he decides to throw himself back into things again and rejoin after taking a break, will the other boys welcome him back? Or will history repeat itself? 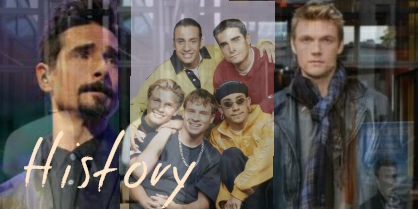 Categories: Fanfiction > Backstreet Boys Characters: AJ, Brian, Group, Howie, Kevin, Nick
Genres: Drama
Warnings: None
Challenges:
Series: None
Chapters: 22 Completed: Yes Word count: 34777 Read: 6521 Published: 02/19/21 Updated: 06/18/21
Chapter 1 by DelphinaCarter
It was a lazy Sunday at the Richardson house. Kevin woke up and stretched, looking for his wife. He smelled something good cooking and smiled. She was up before him today.

“So you're finally awake then. I was wondering when you'd get up.” Kristin giggled, mixing the eggs in the bowl in front of her. Kevin kissed her on the cheek gently and smiled. It had taken a few years but he finally had the home life he wanted. Mason, their son was still asleep in the other room.

“Well, you did keep me awake last night.” he whispered huskily, wiggling his eyebrows and making his wife laugh again.

Kristen smiled back at him as his phone rang, but Kevin ignored it.

Whatever it was could wait until after breakfast, couldn't it?

“The Backstreet Boys have just announced their second cruise…”

Looking away from the computer, he smiled as he watched his son playing with their dog across the room. It was 2011 and just another day at home for him, but he still liked to keep up with what the other boys were doing from time to time. He still kept in touch with his little brothers when he could. He’d had dinner with them in Japan when they were on tour there and he was there at the same time. It was like old times. Especially when AJ had forgotten his wallet and Kevin offered to pay. After that dinner he found himself missing them even more than he did when he was doing Broadway or acting.

He wasn't sure what to think about the fan cruise the guys were having. From what Brian said they were fun. He often missed the fans as well, whenever he got recognized in public he always felt happy, as if he was expecting them to just kind of forget he existed once he left.

Luckily that wasn't the case when he found some of them at the grocery store once. They seemed really happy to see him and he was just as happy to see them. For him it was like seeing old friends. He looked at them and held their hands to say thank you to them for still being fans, something he had always done to make sure the fans knew that he appreciated them.

“We miss you, Kevin. We wish you would come back.” the one girl had told him enthusiastically. He gave her a huge hug and they all took pictures together. He started thinking about how much he missed the fans again and performing.

“Maybe one day,” he'd said with a sad smile.

After the girls had walked away he couldn't stop thinking. As much as he'd tried to be normal again, as much as he tried to just be regular old Kevin- he couldn't avoid feeling the slightest bit empty. He missed the other boys. Seeing Brian at family gatherings once in a while wasn't the same. He tried to keep in touch, but Nick was always busy with some project aside from the occasional text. Howie would answer, but he'd always be in a rush. AJ would talk for a while on the phone but it would get awkward after a few minutes of silence and how are you doings.

Did the other guys even miss him or was that just for interviews and for show? He wondered if he asked to come back, would they welcome him? Nick was angry at him for a while after he left.

“Yes, sweetie? Is everything okay?” Kristin asked, noticing his expression. He looked lost. She hugged him and kissed him gently on the cheek.

“What are you thinking about?”

“You know that interview we saw once where AJ said the door was always open?”

“I do. You ask me about it every so often.” she answered. Kristin knew what he was about to ask her and had seen it coming for a while. He’d brought it up a few times because she and him both knew how much he missed the guys. He would get misty eyed and smile a sad smile while he remembered. How he missed performing and being a group together. Kevin would often look up what was going on with the boys on the computer, and then start reminiscing or want to call one of the guys. He would watch old videos every now and then that he'd taken on his video camera. Videos from tours long since over and buried in a box behind some things in the closet along with his old tour clothes that he kept. He'd look at them and miss them. Miss the fans. Miss performing. Broadway was fun, but it wasn't the same as a concert. Neither was acting. He was inspired to sing again.

Even when he did the play Chicago in Japan, the guys had called him to come to dinner and he was so excited before he then realized exactly how much he missed spending time with his four little brothers. He thought of it often. He was happy when Nick had called him to listen to some songs from his solo work and how proud he sounded when he approved of them. He loved when AJ would call and ask what he thought of whatever project he was working on. It was almost like they missed him too.

“Do you think they mean it?” Kevin asked, coming out of his thoughts. Kristen chuckled because this was always how the conversation went. She knew how much he wanted to go back and wasn’t about to stop him, so she went along with it. Sometimes he would pick up the phone as if he wanted to call them but he always changed his mind. It didn’t seem like this was going to happen this time. She knew he was serious.

Easier said than done. Kevin didn't much like to even make a phone call like that. How would it go? It would be very awkward. He’d left them hanging right before a new album with no direction and a lot of uncertainty. It seemed that they’d figured things out without him and he had almost wanted them to call him and tell him they needed him and he was making a mistake, but they never did. Kevin thought about how a conversation like this would go.

Hey guys, sorry for being an asshole and ditching you but now I want to come back.

No, that wouldn't do.

“You could always ask Brian. He's coming to Mason’s birthday party.” Kristin suggested thoughtfully, and Kevin had to admit the idea had merit. Why hadn’t he thought of this? The party was a great opportunity to speak to someone.

This was perfect. He'd ask Brian.

“Thanks for coming.” Kevin said, shaking Brian’s hand when he arrived at the birthday party.

“How are things? What have you been up to?”

Brian smiled at Kevin and handed over the large box covered in wrapping paper as Baylee walked past, knowing Kevin was about to ask him something important. He could tell this about his cousin, he always hesitated before jumping into anything.

“Well, it's been a while since we saw you…things have been a bit hectic with group plans and all that. I won't bore you.” Brian said, waiting for Kevin to just start talking about what he wanted to. Kevin didn’t say anything.

Kevin and Brian went out to the backyard and each of them grabbed something to drink from a cooler by the pool. The kids were all splashing around and the water looked inviting while the adults enjoyed the barbecue under the hot July sun.

“I saw you guys are doing a cruise again. I take it that the first one went well?” Kevin asked, still trying to make small talk while he thought of how to propose his question.

Brian smiled and drank his beer.

“You saw that randomly, or have you been keeping tabs?”  he chuckled softly.

It was funny to see Kevin blushing, his ears turned a slight shade of red.

“Sometimes I do, yes. I like to know what y'all are up to. I may have left but that group meant a lot to me. It's part of me…”

“Well, it's funny you say that because the whole time Nick kept saying that you'd never do a bunch of the stuff we get up to.”

“He talks about you a lot.”

Kevin smiled. He had been hoping that Brian would mention that because of how Nick reacted when he had announced to the others he was leaving the group for a while. Nick was the one he was most worried about accepting him.

They talked for a while longer before Brian cleared his throat and took another beer.

“So are we going to pretend to discuss Nick or did you have something to ask me?”

“I've been thinking-” Kevin started but his wife came over in a rush.

“Someone needs to look after the grill, everyone's getting hungry.” Kristin interrupted, holding a plate of burger patties and smiling. Kevin and Brian moved to the patio, where he started to cook lunch. He tried to recollect his thoughts.

“What were you going to say?” Brian asked.

Kevin started stoking the coals on the barbecue while it heated up and took another drink from his beer bottle.

“I think I am ready to come back.”

Brian looked genuinely confused, as if he had stared into the sun too long.

“I know I left you guys hanging, but I think I am ready to come back to the group with everyone’s blessing.”

Brian didn't say anything but dropped his beer bottle in surprise, causing everyone to look up and Leighanne to run over and fuss over her husband.

Kevin wondered briefly if the others would also take this the same way and if they would really accept him back into the group.