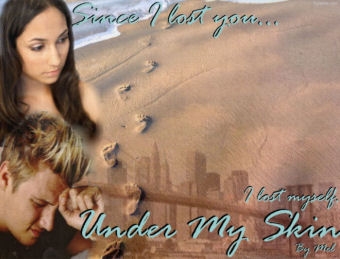 Well, thanks for that ending...leaves us all hanging here! Update soon!!!

Author's Response: Sorry! LOL I left it like that purposely because I wanted it to end on that \"will they or won\'t they?\" note. Gotta keep you guys hooked somehow LOl j/k. Thanks!

Aaaaaaw! Cuuuute! I love it! Have fun on your vacation!

Author's Response: Thanks. It might be a while because I just moved and the computer still hasn\'t been set up at my new house.

In Memory Of by Chaos Rated: PG

I agree with Mare...KEEP IT GOING! I love it!

Author's Response: Thanks! I probably will, but I\'ve got to come up with a direction to take it first. lol. Thanks for reading and taking the time to respond!

Why Can't I, Be There Where You Are? by LenniluvsBrian Rated: PG

[ - ]
Summary: Clay Aiken is off auditioning for American Idol while his family is still back home in Raleigh, North Carolina. The audition?s are during November. Clay has five siblings who all still live in Raleigh ? two older, three younger. A terrible accident happens, and a certain someone witnessed it, though no one knows it. Can't say more, or it'll ruin the story. Sorry! Enjoy!
Categories: Fanfiction > Music > Clay Aiken
Characters: None
Genres: Drama
Warnings: None
Series: None
Chapters: 13 Table of Contents
Completed: Yes
Word count: 22199
Read Count: 15255

Author's Response: I shall update in a short while - provided I don\'t forget! ~Lenni~

Clay is RUDE! But I love your story! Update soon!

Author's Response: *laughs* Yes, I know that he is. But remember, he\'s been through a lot too. ~Lenni~

Author's Response: I shall try to update soon! ~Lenni~

[ - ]
Summary: While recording for his solo album, Welcome Home, Brian suddenly encounters feelings which he has never dealt with for awhile. He suddenly becomes insecure and harrassed, but he is uncertain of the source.


When Nick is injured in a car accident, Brian's insecurities plummets, slowly destroying his already battered heart. He is worried about Nick and would do anything to help him get better,... but he is also determined to continue recording.


Would he be able to face the coming circumstances awaiting him? Would he be able to stand strongly for his beliefs despite of opposition? He will learn a new lesson that only life can tell as he accidentally bumps into several people whose lives will be changed forever...

The Road Back Home by Andro Rated: PG-13

[ - ]
Summary: When one loses everything that defines them as the person they have become, can new love replace what was lost and make that person whole again? This story is about loss, struggle, strength, and most of all, love.
Categories: Fanfiction > Backstreet Boys
Characters: AJ, Nick
Genres: Drama, Humor, Romance
Warnings: None
Series: None
Chapters: 47 Table of Contents
Completed: Yes
Word count: 72501
Read Count: 65149

I remember this! I loooooooooooved it!!! But I Looooove you mooore!!!! :)

Author's Response: I love you too!

Beyond The Sea by miss_hypergirl Rated: G

Two best friends, a missing person, a foreign country and a man searching to find the missing pieces. Will Nick find Ali before it's too late, or is fate already in control of their lives?