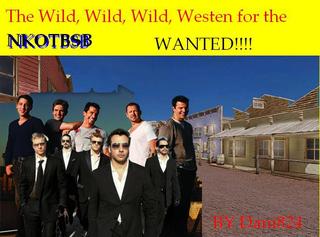 Watching a Western movie-a-thon on the NKOTBSB, the Backstreet Boys and New Kids on the Block enter the old Wild West of the late 1860's out from the Plains to the California coast and even the Organ trail. Can they save the small towns of Pensville and Jacob's drinks? Will they get home? Will AJ get married when they get back? Will Nick still love his favorite socks? Can they survive a showdown? We'll see.

Rated: PG-13
Categories: Original Fiction, Fanfiction > Backstreet Boys, Fanfiction > Movies, Fanfiction > TV Series
Characters: Group
Genres: Alternate Universe
Warnings: Violence
Challenges:
Series: None
Chapters: 2
Completed: No
Word count: 1212
Read: 1662
Published: 08/26/11
Updated: 08/27/11
Story Notes:
Brian and Jordan hold MOVIE-A-THONS every two months in their hotel rooms when they guys have 3-5 days off. Somehow the guys get stuck in the old Wild, Wild, Wild, Wild West. Inspired by the song, "Wild Wild West" by Will Smith, Songs from Howie's new album, and from old western movies and books, and legends from there. Any and all material used will be cited or mentioned in the story. Some cussing, some sexual content, mild nudity, and lots of fun, for late teens and adults rated P -13!


The guys are on tour and decide to go see a movies of Western's in Jordan's hotel room, while on the NKOTBSB tour. They watch the beginning of a movie and things get weird.


The guys are knocked unconscience while watching Westen movies in Donnie's Hotel room. They wake up in an old west town and wondering how they got there, near the tiny town of Pensville. Near the Organ trail. AJ is shocked that the guys have no idea what is going on. Nick is wondering where the people went. Jordan and the New Kids on the Block are trying to figure a way back home or at least a direction somewhere.